This post isn’t even a review because it’s about bread.  By default bread is perfection.  I mean, I can’t really think of a bread I don’t like. Can you?

I’ve been intending to post about this bread from Trader Joe’s for quite awhile, but it tends to disappear quickly in my house. 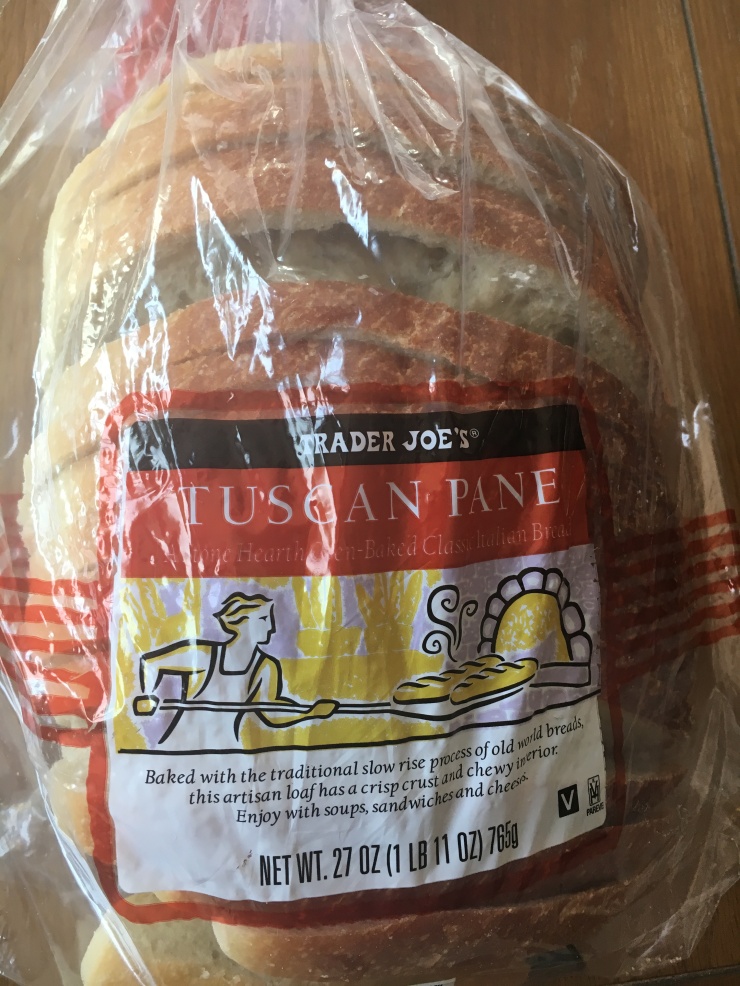 When you find yourself at Trader Joe’s do yourself a favor and pick up a loaf of the Tuscan Pane.  Even if you don’t think you will use it right away you can always freeze it for later.

I use this bread for everything.  It MUST be toasted to maximize enjoyment.  It makes a great toast and is an excellent bread for a (vegan) grilled cheese (you don’t need to toast ahead of time fyi).  I also use this bread as part as an appetizer  when I’m entertaining.  There are really endless possibilities. 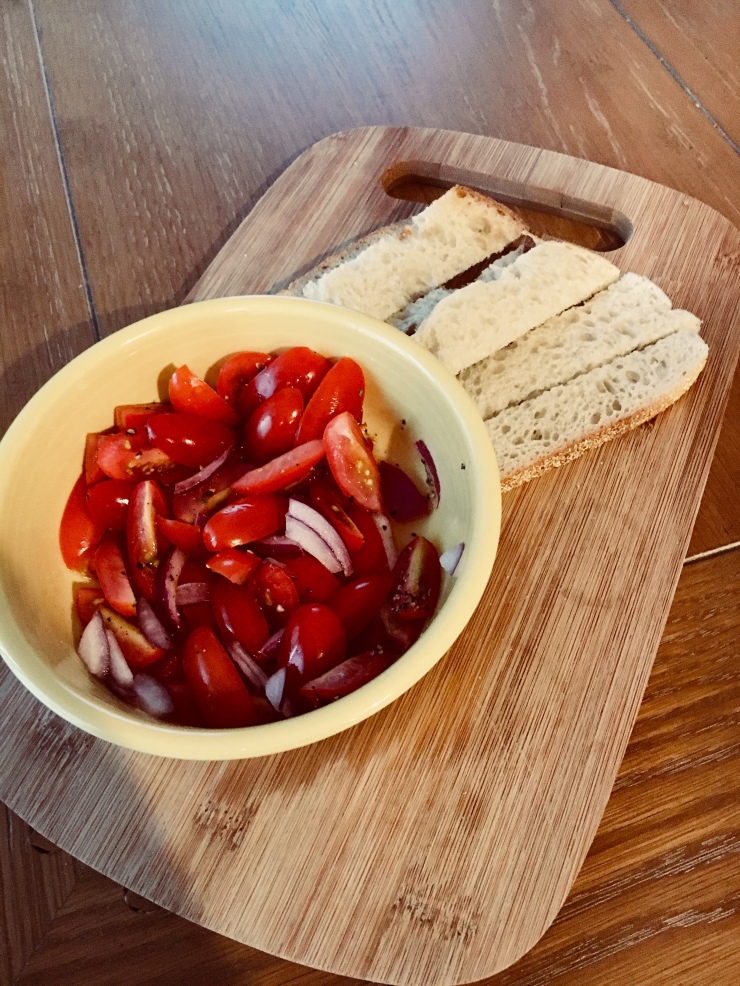 My husband and I are going to enjoy a few slices of this tonight with some balsamic tomatoes.  Then I swear I’m freezing the rest so it doesn’t mysteriously disappear tonight!

Well it’s past 8 and we haven’t eaten yet, but for the sake of preserving WFDW we are having some Beast Burgers.  We just put the baby to bed and the hubby is downstairs in his “office” (aka table in the basement) logging his hours for the day.  Dylan spent about a half hour upstairs with Soy Bean putting him to bed, and I got SO much done.  It’s really amazing what you can do without a one year old attached to you!  I paid two bills, unloaded the dishwasher, RSVP-ed to a baby shower, bought a shower gift, and made a vet appointment for Daisy.  Go me!

Okay back to food…What I love about this meal is Dylan is totally in charge now that he has a grill.  Woohoo! 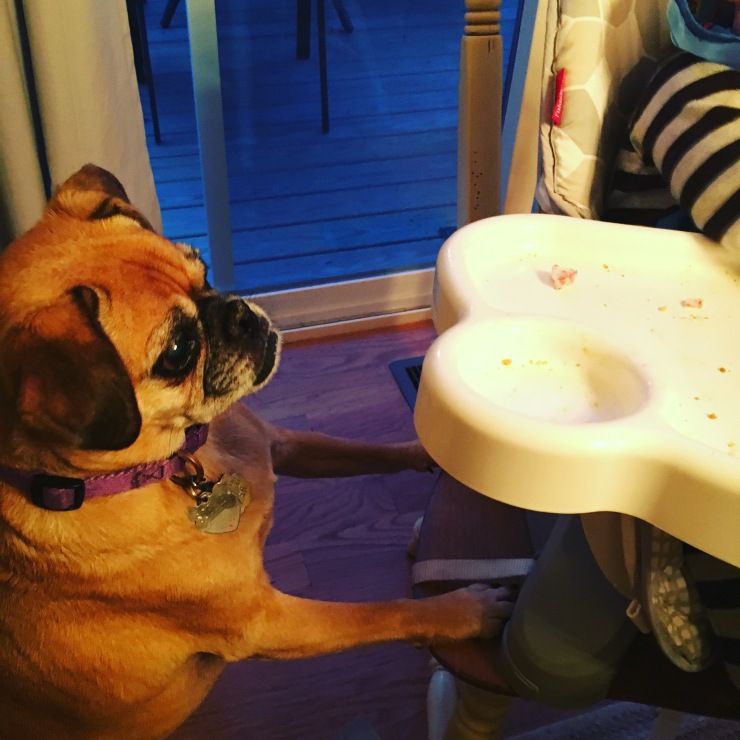 Beast Burgers are a little bit pricy, but they are totally worth it and make a nice special treat.  I’m just hoping we have some outdoor weather soon so we can enjoy a meal on our deck.

So I’ve reached that awkward point in adulthood where my childhood nightmares become my happiest dreams.  My husband and I are buying a house in the town where I grew up and I could not possibly be more excited.  It’s close to our families, our jobs (I was commuting about two hours last year back and forth to work), and it’s located on the beautiful (well at least I think it is) south shore of Massachusetts.  Fifteen year old me would find it totally lame to move back to the town I grew up in. So boring!  Adult Sarah is pumped.

Thankfully, this town has diversified and opened up more restaurants and grocery stores than where available when I was a kid.  I think the only restaurants in town when I was growing up was the “fancy” Italian place that served too much garlic (but can you really ever have too much garlic?) and Unos.

We plan on venturing out once in awhile, but as many of you know, buying a house means a change in the way you spend money.  Frankly, I’m looking forward to cooking more.  When we’re not eating Subway, my family and I have been living off of four plates and a pan the last month in anticipation for this move.  I’m excited to be reunited with my Fiestaware and real wine glasses.  I’m also transitioning into an awesome kitchen with more than three feet of counter space.  Woot woot!

We’ve spent quite a bit of time on the south shore this year, mostly for baby’s doctors appointments, visiting family and stalking our new house, and we’ve been lucky enough to have a few dates nights here in there.  My husband and I are blessed with wonderful parents that love our kids and actually WANT to spend time with them.  Last week we dropped baby boy off with my parents and ventured out to the Plymouth waterfront.

Though not the most original dining conquest we went to Sam Diego’s in Plymouth and were not disappointed.

I guess it’s hard to be disappointed when you order $40 dollars worth of (mammoth) margaritas (we got good tequila okay?), but no seriously, we were not disappointed.  While they have a vegetarian section on their menu they actually have a separate special menu with vegan options.  You just need to ask for it.   We ordered the black bean burritos and quesadilla to split.

The wonderful thing about Mexican food is that meat can very easily be replaced (via beans).  At home when I make a Mexican based meal I usually will incorporate vegan cheese and sour cream.  This meal had no vegan substitutes but we were not missing out at all.  The quesadilla was my favorite, and had caramelized onions in it which gave a nice meatiness to it.  Everything was really delicious, and I don’t think that’s much the margaritas talking.

The hubby and I have find Mexican restaurants pretty easy places to remain vegan when dining out.  Worst case scenario, you order something with beans and hold the  cheese and sour cream.

Speaking of bean dishes, once we’re all moved and settled (and most importantly have internet) I need to share my chili recipe.  I can’t believe I haven’t shared it yet!

I hope you’re all enjoying the last days of summer!

I get a lot of requests from family and friends to make these cookies.  Today (Friday, I’m running behind!) my husband suggested that we make them.  I think there’s no better time to indulge than a snowy weekend so why not?

We’re enjoying a very unexpected long weekend here.  The hubby and I had our first snow days of the year on Thursday and Friday.  Woohoo!  Perks of having a June baby, I probably won’t be making up these days!

I currently have a cake in the oven because the baby is craving cake and I don’t want to deprive my son, but let’s talk cookies.  These chocolate chip cookies are vegany deliciousness.  Simple, easy, and a crowd pleaser.  Best of all y0u probably have all the ingredients in your kitchen right now!

Ok maybe you don’t have vegan chocolate chips in your pantry right now, but they’re not too hard to find.  You can usually pick some up in the earthy crunch section of your local grocery store.

Have your oven preheated to 375 degrees. I scooped out my cookie dough with and ice cream soup and spread my cookies about two inches apart on my cookie sheet. I covered my pan with aluminum foil because I have a cheap cookie sheet and I was afraid they would stick. I cooked my cookies for about 25 minutes.

One of the best parts about making vegan cookies…the cookie dough is totally up for grabs since there no raw egg!  Happy baking.

I’ve been on a scones kick, that’s for sure.  I guarantee I’ve eaten more scones in the last five months than I have in my entire life.  Scones are awesome and super easy to make!

I haven’t been too daring in my scone pursuits, mostly sticking to blueberry scones, but last weekend I took a risk.  I decided it was time to attempt some cranberry orange scones. 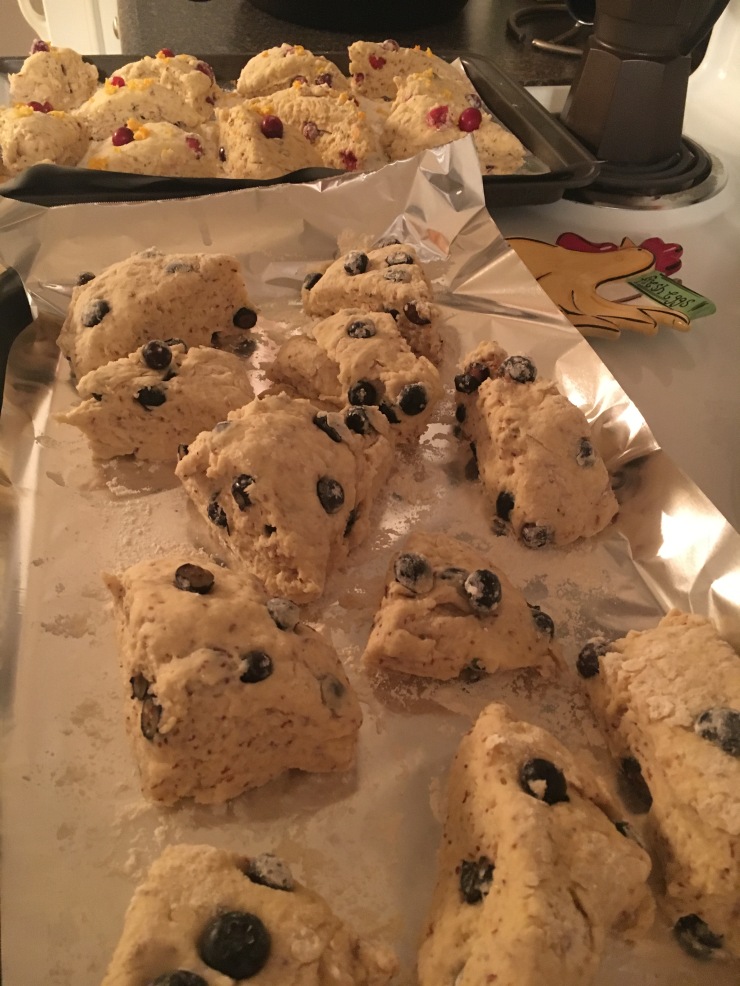 I’m a good New Englander, so of course I need to cook with cranberries.  I love the tartness of cranberries.  I decided to attempt some cranberry orange scones.  I was quite please with how they came out!

Preheat oven to 375 degrees. First, make your flax eggs (three tablespoons of water and one tablespoon flaxseed meal = one egg) and set aside in a bowl. In a large bowl combine flour, sugar, baking powder and salt. Add the cold butter to the dry ingredients. Take a fork and cut up the butter until your mixture resembles wet sand. Whisk together 3/4 cup of milk and flax egg and add to the bowl. Mix together and add the remaining 2 tablespoons of almond milk and orange juice. Fold in your cranberries and orange zest. On a well floured surface kneed your dough and flatten into an about 8 inch circle. Cut your dough with a pizza cutter into eight triangles. Place the individual triangles on a baking sheet. I lined mine with aluminum foil lightly coated with flour. Bake for 30 minutes.

Call me bias, but these came out pretty good.  I love taking one of these to work everyday to enjoy with my coffee.  Enjoy!

I can feel summer slipping away already.

Back to reality soon.  It’s been an amazing summer.  We just got back from my best friend’s wedding in upstate New York where I was proud to be one of her maids of honor.  Since then we’ve been trying to fit in our final beach days, time at the pool and long walks at World’s End.  Sigh.

We are, however, looking forward to fall.  Who doesn’t enjoy the plethora of pumpkin flavored foods and scents?

But before I go into pumpkin mode I am going to soak of the last of this crazy hot and humid weather, and while I do that I’m going to enjoy a nice frozen drink.  Now, I couldn’t tell you the last time I had an orange julius but I always knew I liked them.  I finally attempted to make a vegan version of the drink and it was a hit!  Here’s what I did.

You will need a blender powerful enough to blend ice for this.  We are lucky that we have a Vitamix at home which does the job nicely.  First I blended the vanilla extra and almond milk together, then added the rest of the ingredients.  I blended until I could no long hear any ice.

I loved this drink, I only wish it was a little lower in calories.  The orange concentrate certainly packs a punch in that department.  Oh well.  This drink is perfect for a hot summer day and can be enjoyed by the whole family (except for the dog).  Cheers!