So I’ve reached that awkward point in adulthood where my childhood nightmares become my happiest dreams.  My husband and I are buying a house in the town where I grew up and I could not possibly be more excited.  It’s close to our families, our jobs (I was commuting about two hours last year back and forth to work), and it’s located on the beautiful (well at least I think it is) south shore of Massachusetts.  Fifteen year old me would find it totally lame to move back to the town I grew up in. So boring!  Adult Sarah is pumped.

Thankfully, this town has diversified and opened up more restaurants and grocery stores than where available when I was a kid.  I think the only restaurants in town when I was growing up was the “fancy” Italian place that served too much garlic (but can you really ever have too much garlic?) and Unos.

We plan on venturing out once in awhile, but as many of you know, buying a house means a change in the way you spend money.  Frankly, I’m looking forward to cooking more.  When we’re not eating Subway, my family and I have been living off of four plates and a pan the last month in anticipation for this move.  I’m excited to be reunited with my Fiestaware and real wine glasses.  I’m also transitioning into an awesome kitchen with more than three feet of counter space.  Woot woot!

We’ve spent quite a bit of time on the south shore this year, mostly for baby’s doctors appointments, visiting family and stalking our new house, and we’ve been lucky enough to have a few dates nights here in there.  My husband and I are blessed with wonderful parents that love our kids and actually WANT to spend time with them.  Last week we dropped baby boy off with my parents and ventured out to the Plymouth waterfront.

Though not the most original dining conquest we went to Sam Diego’s in Plymouth and were not disappointed.

I guess it’s hard to be disappointed when you order $40 dollars worth of (mammoth) margaritas (we got good tequila okay?), but no seriously, we were not disappointed.  While they have a vegetarian section on their menu they actually have a separate special menu with vegan options.  You just need to ask for it.   We ordered the black bean burritos and quesadilla to split.

The wonderful thing about Mexican food is that meat can very easily be replaced (via beans).  At home when I make a Mexican based meal I usually will incorporate vegan cheese and sour cream.  This meal had no vegan substitutes but we were not missing out at all.  The quesadilla was my favorite, and had caramelized onions in it which gave a nice meatiness to it.  Everything was really delicious, and I don’t think that’s much the margaritas talking. 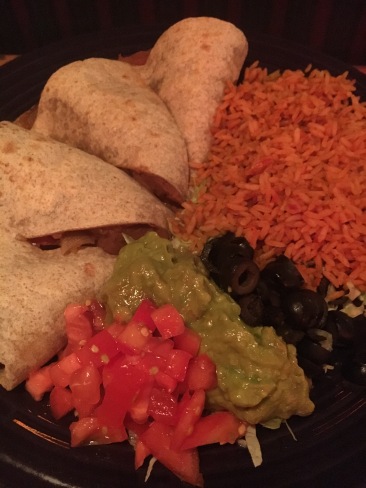 The hubby and I have find Mexican restaurants pretty easy places to remain vegan when dining out.  Worst case scenario, you order something with beans and hold the  cheese and sour cream.

Speaking of bean dishes, once we’re all moved and settled (and most importantly have internet) I need to share my chili recipe.  I can’t believe I haven’t shared it yet!

I hope you’re all enjoying the last days of summer!

View all posts by theimpressionablevegan