Whoever this Mr. Bagel is I hope he’s single.

I’m not a religious person but I think I came pretty close to God when I ate at Mister Bagel. First, we could not find the place for some reason.  We had breakfast here our last morning in Portland, and had walked by several times.  However, when it came to actually finding Mister Bagel, he was a man of mystery (mostly because we plugged “Mr.” Bagel into the gps).  At this point, to my husband’s delight, I was pretty hangry but we kept searching and found it.  I’m so glad we did.

As a vegan, I figured I’d probably be stuck ordering a bagel just plain (no worries I never met a carb I didn’t like) but to my delight there were TONS of vegan options.  They had hummus as well as several different tofu spreads.  I had not idea what to expect with the tofu spread but I order a super bagel (which was pretty much an everything bagel) with veggie spread and the hubby ordered a salt bagel with olive spread.

First of all, both sides of the bagel are the top part.  How do they do that??? Is it like the Seinfeld episode with the muffin tops and there’s a plethora of bagel bottoms somewhere or are these mutated bagels?  Whatever is going on there, it was awesome.

Second of all, the tofu spread was amazing.  I can’t believe it was made from tofu.  The texture was so similar to whipped cream cheese.  I plan on attempting to recreate this at home.

This was one of my favorite things we ate in Portland.  Seriously.

Oh Holy Donut.  Your donuts were so delicious.

Vegan’s don’t get to indulge in donuts too often.  I’ve made my own at home with our five year old, but besides that I haven’t had a donut in a long time.

This is why Holy Donut is awesome.  They offer not one but two vegan options!

The secret ingredient to these donuts are Maine potatoes, which I found fascinating.  The texture was moist and melted in your mouth.  We ordered the cinnamon sugar donut and fresh berry glazed donut.  I thought I would gravitate more towards the cinnamon sugar donut but I really enjoyed the berry as well.  You could tell these donuts were made with fresh ingredients.  Sorry Dunks.

We ordered some cold brew iced coffee as well.  Get this, they put iced cubes with iced coffee already in them!  Wow!  That’s an idea I thought was original but I’ve been too lazy to actually carry it out.

Anyways, if you’re in the area you need to check this place out.  I don’t think you’ll be disappointed.

It’s me again, and yes I’m still writing about our trip to Portland.  When we travel it’s always nice to have a special place in mind to eat, but sometimes the best meals are on a whim.

If you’re a vegan, you know that Asian restaurants are usually pretty veggie friendly.  The hubby and I were craving some Thai food our second night in Portland so we checked out Pom’s Thai Restaurant and Noodle House.  I didn’t do any research on this place besides walking by it a few times over the course of our travels.  We weren’t disappointed. 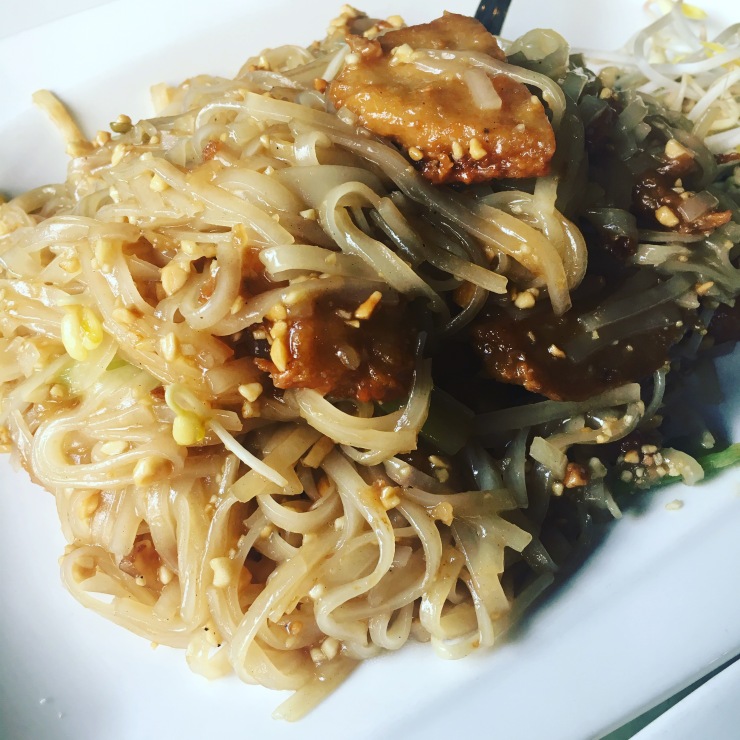 In addition to their regular menu, Pom’s offers an entirely vegetarian menu as well!  All we had to do was ask them to hold the egg on a few dishes.  We started with the gyoza which was really good.  It was served with yellow mustard which I thought was strange but besides that we enjoyed the app.  We were also STARVING at the time might I add… 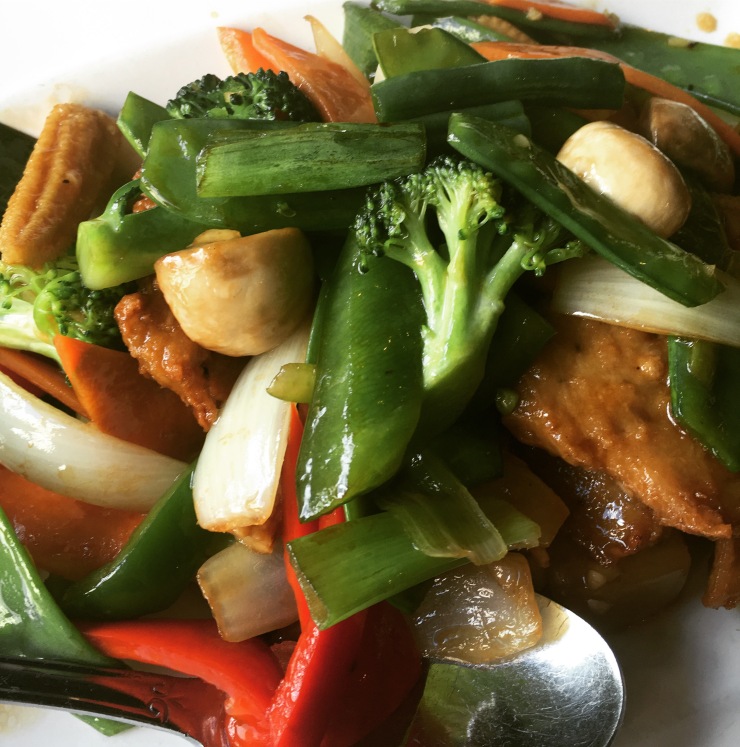 For entrees we ordered the pad thai and a veggie stir fry dish.  These were excellent.  Both came with a fried tofu that resembled a chicken-like texture.  You could tell the veggies were nice and fresh and the dishes were served to order.  We ate ever last bite.

Being married for one year calls for a fancy dinner rights?  Ok I’ll settle for pizza and salad, but it has to be some of the best pizza and salad I’ve ever had.

Flatbread Company came highly recommended to us from several different people so we knew we had to check it out when we visited Portland.

We check into our hotel, walked around downtown Portland (in an attempt to burn off those french fries from lunch) and then put our name in at Flatbread.  It’s probably a good sign when there’s a 45 minute wait on a Monday night.

The hubby and I relaxed and enjoyed the view by the water while we waited.  When we were seated we had a great spot by the windows which has an awesome view of the harbor.

I cannot speak highly enough about our experience there.  The service was great, all the ingredients were organic and fresh, and there were tons of vegan options.

We started with a salad which was probably one of the most delicious and fresh salads I have ever had.  It had locally grown mesclun greens and sweet leaf lettuce along with organic celery, carrots, toasted sesame seeds and Maine sea kelp.  It had the perfect amount of dressing which was a homemade ginger-tamari vinaigrette.  There was an option to add additional organic veggies so we opted for oven-roasted red bell peppers and organic red onions.  I would eat this ever single day. 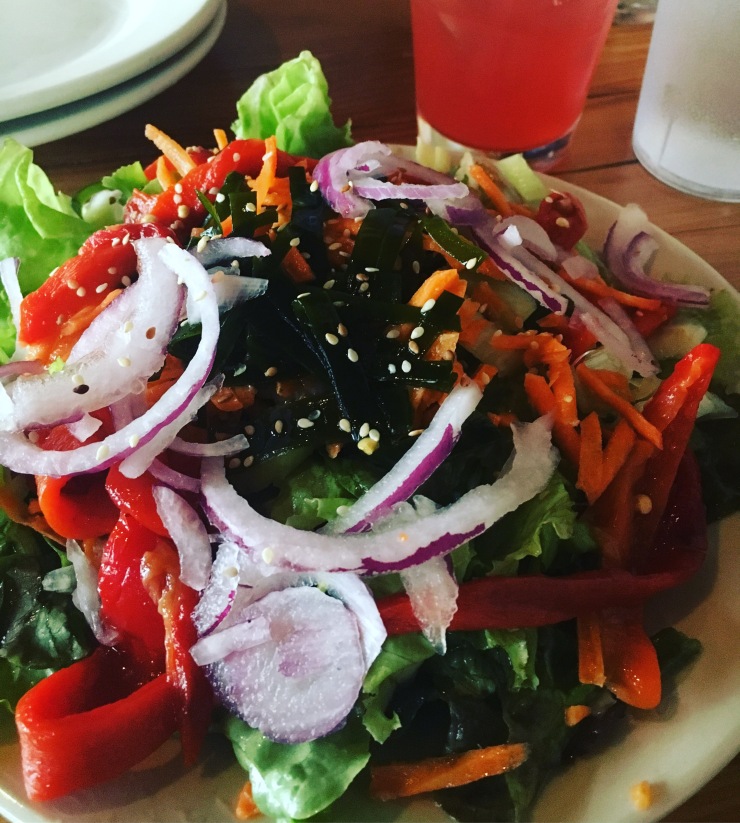 We ordered a flatbread that was a special of the evening.  I’m trying to remember every delicious ingredient and I believe it had olives, tomatoes, peperoncino, some sort of green and onions.  It originally came with two different types of cheese but our server informed us that we could substitute the cheese for Daiya.  This was a restaurant first for us.

It was awesome and we were able to polish off most of a large flatbread.  The crust was delicious.  I am definitely inspired for our next family pizza night.  If you’re ever in the area visit Flatbread Company for sure.

As I mentioned before, the hubby and I just got back from an awesome little vacation.  It’s always so nice to get away from it all.  No cleaning, no laundry, no checking emails and my manicure still looks fantastic from Sunday.  Yeah vacation is pretty awesome.

On our way up to Portland, Maine, we stopped at The Friendly Toast in Portsmouth, New Hampshire.  This was a trip down memory lane for my husband.  A long long time ago he was an undergrad student on the north shore.  He and his friends would venture up to Portsmouth for some good food (who likes dorm food anyways?).

One of the appeals of this spot is that is veggie friendly.  Yay!  If you are a vegetarian/vegan you know that breakfast can be tricky when you’re dining out.  I would probably consider it the most difficult meal eat as a vegan.  Although, their menu is more vegetarian friendly than vegan friendly, there were plenty of options.   No sticking to a fruit cup and plain bagel here!

The hubby and I were living it up on vacation so we started with the orleans fries.  They were the perfect balance of savory, spicy and sweet.  They just might be the best fries I’ve ever had.  Seriously.  They come with sour cream which we omitted from our order, but I would be curious how vegan sour cream would have accompanied these babies. 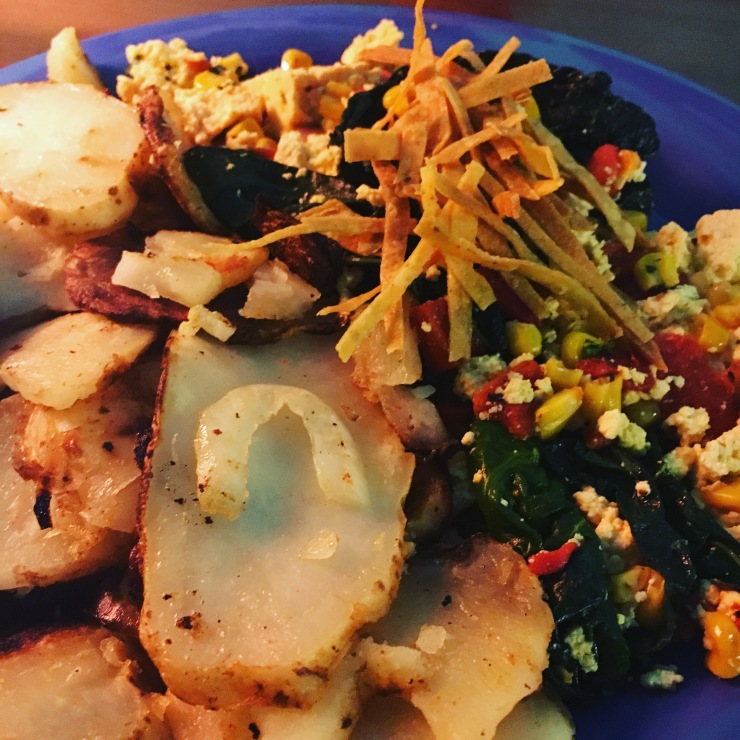 I appreciated that their egg scrambles could be substituted with tofu.  That’s an option I wish more places had.  However, I order the “so it ve-gan” which was the only vegan scramble on the menu (the other scrambles you could easily order without cheese).   This scramble came with black beans, kale, roasted red peppers, corn salsa, salsa verde and tortilla strips.  It was tasty.  I was a little disappointed in the home fries and pretty much left them alone.  I wanted to order a side a veggie sausage, but sadly the sausage and bacon veggie options were not vegan.  My meal did however come with toast.  They make their own fresh bread and it was delicious.  I did wish they had vegan butter for it however.

My husband ordered the falafel wrap which was always his go to in his college days.  He was a little disappointed in it as well.  I tried a few bites with no expectations and it honestly wasn’t that special. 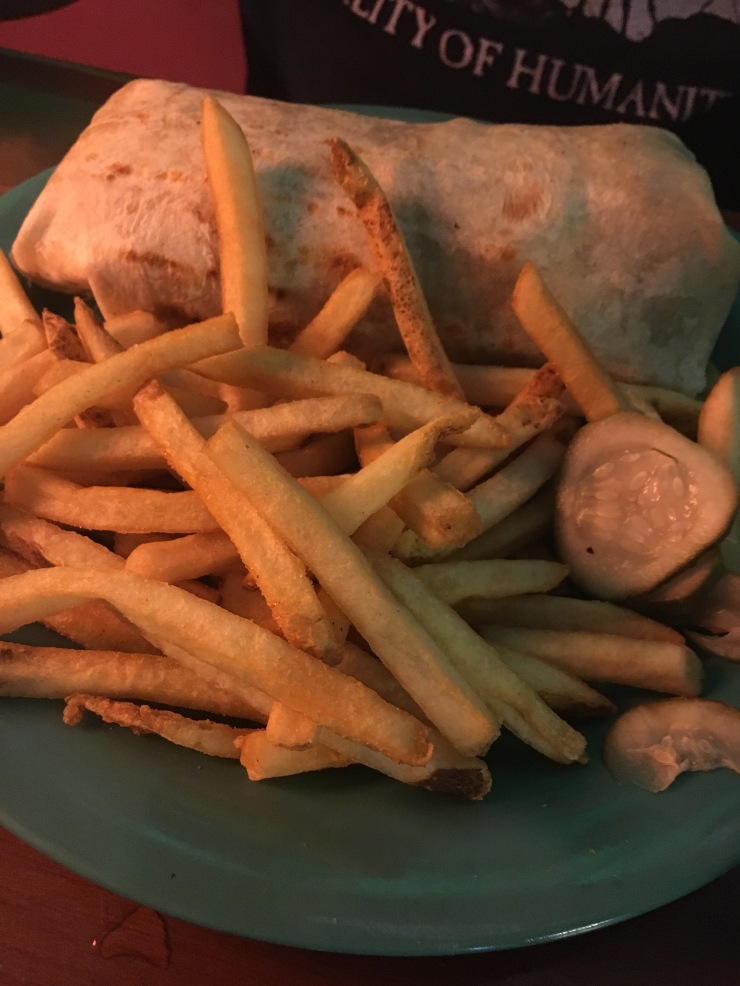 I appreciate the veggie friendly options on the menu but wish they had more vegan options.  When you’re offering so many tofu options I think it would make sense to have vegan meats and butter to accompany those meals, but then again I’m not in the restaurant business.  Overall, I would recommend this place and visit it again…if not just for those fries!

I cannot believe I’ve been married for a year!  Well technically a year +2 days as I write this…

The hubby and I just got back from a little excursion to Portland, Maine.  We hiked, hunted for sea glass, took in a minor league baseball game and ate some awesome vegan food (which obviously I will post about later). 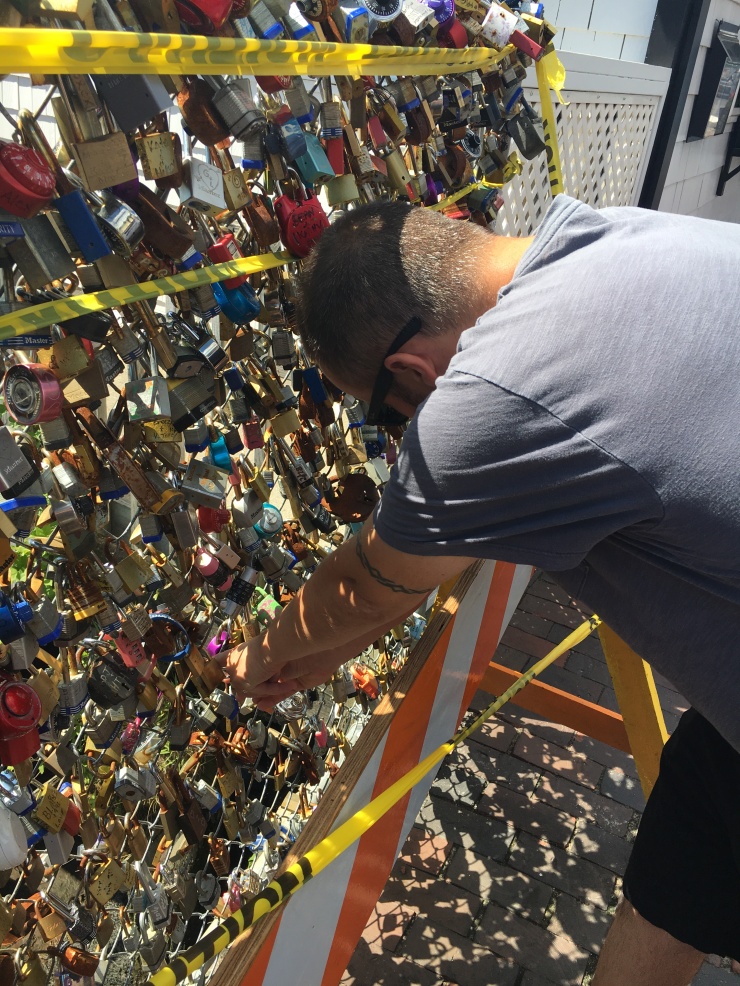 On our last morning in Portland we visited the “Love Locks Fence” and contributed our own lock.  This is significant to me.  The last time I was in Portland I was visited with my parents.  My mom reminded me that when I saw the locks on the fence I stated that I would never have anyone to do that with.  I never imagined that the next time I would be in Portland I would be visiting with my husband.

I can’t believe a year of marriage has passed already.  I remember our wedding like it was yesterday.  I am so thankful everyday to have a partner  I trust, he supports me, he respects me, and he loves me more than I ever thought I deserved.